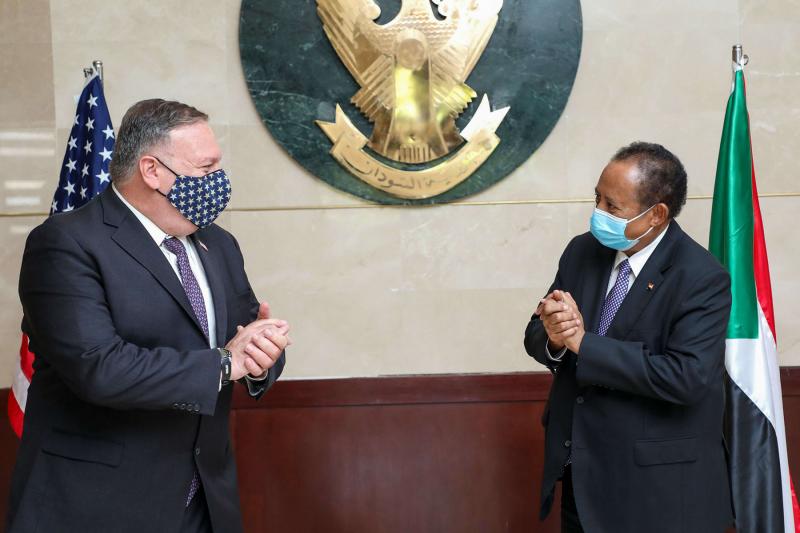 The leadership of Sudan and the occupation state of Israel announced, Friday, that with US mediation, they had made an agreement to normalize relations between them, the Jerusalem Press reported.

In a joint statement, Israel, Sudan, and the US, made public a normalisation agreement between Israel and Sudan, adding to the deals Israel has made with the UAE and Bahrain on September 15.

Israeli newspaper “Israel Hayom” reported that Sudan had agreed, in principle, to establish relations with Israel, and indicated that an Israeli delegation took an extraordinary trip from Tel Aviv to the Sudanese capital of Khartoum last week, among them was the head of the Israeli intelligence agency, the Mossad.

It added that Sudan’s decision is related to the recent US decision to remove Sudan from the list of states sponsoring terrorism.

“A meeting with a senior US-Israeli delegation held in Khartoum, led to an initial agreement on the gradual normalization of relations with Israel,” a high-ranking Sudanese official told Asharq Al-Awsat, the International and Arab News.

The US and Israeli officials held secret meetings with the Sudanese delegation, where they discussed removing Sudan from the list of state sponsors of terrorism, access to international aid, and access to frozen funds, in return for normalisation with Israel, the official added.

The Islamic Resistance Movement, Hamas, on Friday, condemned the agreement in a statement, “We express our condemnation, anger and indignation at this disgraceful and insulting normalization.” the Palestinian Information Center reported.

The Palestinian Presidency conveyed, on Friday, its rejection of the Israeli-Sudanese deal, vowing to take the necessary actions to protect the legitimate rights of the Palestinian people, the Palestinian WAFA News Agency reported.

In a press statement, the Presidency announced that the deal is in violation of the Arab League resolutions, the Arab Peace Initiative and the United Nations Security Council (UNSC) Resolution 1515.

Presidential spokesman, Abu Rudeineh, said “Normalisation is unacceptable, rejected and condemned, not only because it is contrary to Arab laws and international legitimacy, but because it circumvents the Palestinian people,” WAFA reported.

It added that Fatah spokesman, Usama Qawasmi, said in a statement that “our Palestinian people and their leadership will confront the conspiracy aimed at circumventing the rights of our people and to liquidate their just cause,” stressing that “peace and security begin and end in Palestine.”

The ‘Coalition of the Forces of National Consensus in Sudan’ said in a statement, that the people of Sudan, are not bound by the agreements reached by pro-normalisation forces.