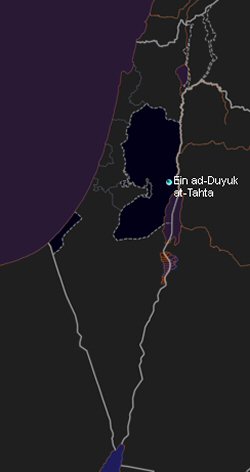 Israeli forces, on Wednesday, demolished two Palestinian homes in Ein Ad-Duyuk At-Tahta, a village to the west of Jericho, said witnesses, according to WAFA.

Israeli forces raided and deployed in the village before bulldozers demolished two homes, including one made of tin sheets, under the pretext of unlicensed building.

One of the homes occupied an area of 120 square meters and belonged to Allam Abdullah, a Palestinian from Jerusalem.

Ein Ad-Duyuk is one of the water springs that have supplied water to all peoples who resided in Jericho throughout history.

Israeli forces and settlers have frequently targeted the villagers of Ein Ad-Duyuk, torching their crops, stealing their dates and demolishing their structures.