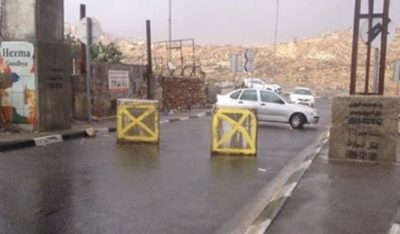 A large military force invaded, on Sunday evening, the town of Hezma, east of occupied East Jerusalem, and completely isolated it from its surrounding area, in addition to forcing all stores to close. The soldiers also assaulted and injured one Palestinian teen, while a colonialist settler rammed another with his car, causing serious injuries.

The invasion into the town was carried out by more than twenty armored military jeeps and vehicles, before the soldiers started firing gas bombs, and sprayed many homes and property with waste-water mixed with chemicals.

The soldiers also forced shut all stores and shops in the town, in addition to targeting many Palestinians with gas bombs at a junction leading to the town.

Furthermore, many soldiers assaulted Hani al-Hilo, 17 years of age, causing fractures, cuts and bruises to various parts of his body, before he was rushed to Ramallah Governmental Hospital.

Another Palestinian, identified as Roshdi Yasser al-Khatib, 16, was seriously injured after an Israeli colonialist settler rammed him with his car, and fled the scene.