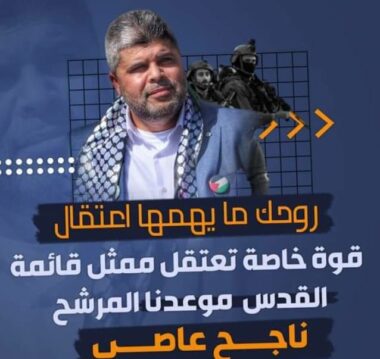 Undercover Israeli soldiers kidnapped, on Monday at night, a Palestinian doctor from his home in the al-Biereh city, near Ramallah, in central West Bank.

The soldiers invaded the home of Dr. Najeh ‘Aassi, and repeatedly assaulting him in his home, before taking him to an unknown destination.

His wife said the undercover soldiers kidnapped her husband shortly after he received a phone call from the hospital to head to a traffic accident to tend to several wounded Palestinians.

When the soldiers broke into his home, the doctor was about to leave the property to rush to the accident site.

It is worth mentioning that Najeh is a candidate in the upcoming Palestinian general election.