US Student Assaulted by Israeli Soldiers at Al-Aqsa (VIDEO) 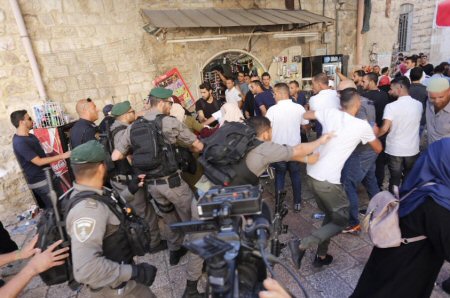 Three American women were violently assaulted by Israeli occupation forces as they attempted to help a disabled woman at Al-Aqsa Mosque on Tuesday, despite showing soldiers their passports.

Virginia nursing student Nour Hawash, who is in Jerusalem on vacation, was taking photos with her mother and sister after midday prayers when Israeli occupation soldiers stormed the compound and started to evacuate the Dome of the Rock.

“Suddenly we heard these shots being fired and people just started running all over the place. We saw the IDF [Israeli soldiers], guns pointed, running, trying to chase people. So we just ran with everyone else to the side,” Nour said.

The number of Israeli troops in the courtyard quickly grew, from a dozen to between 50 to 100 soldiers; Nour also saw several Palestinian men being arrested.

“They were not letting anyone near the Dome of the Rock, they had surrounded it from all its doors,” the 21 year-old student says. “And there was an old lady being wheeled out as she was leaving the prayer area and she fell out of her wheelchair and she was unable to get back in. And I saw that a couple of women were trying to help her, but they were being shoved so I tried to go in as well.”

However, as Nour moved towards the elderly woman, she found herself shoved to the floor by an Israeli soldier, who cuffed one of her wrists and proceeded to sit on her to stop her from moving.

“That’s when like ten to 15 soldiers were holding me down with their feet, trying to get my other wrist in handcuffs. And I had pulled out my passport and I told her [the soldier] that I was an American citizen and she said ‘I don’t care about your ID’ and threw my passport to the side.”

Other soldiers then dragged Nour’s mother, Germeen Abdelkarim, away from her daughter and pushed her against the wall, handcuffing her, as younger sister Safa watched on frantically.

“My sister was going back and forth trying to get to us, but she was being physically pushed down to the ground, and punched and shoved, they pulled her scarf off and tried to choke with it so she couldn’t come near me,” Nour recalls.

After being held down for more than half an hour, an Israeli guard picked up Nour’s American passport from the ground and instructed the other soldiers to release her. Both her and her mother were violently shoved away, and pushed back from the Dome of the Rock close to the compound gates.

However, all the doors had been barred and the family were trapped near the entrance for an hour, neither able to access the mosque nor the rest of the Old City. Even after the gates were opened, the Old City was held under lockdown for a further three hours, before the women could return to their hotel.

Nour has contacted the US embassy in Jerusalem to inform them of the family’s treatment; whilst officials have said they would file a report of the incident, it is unlikely that any further steps will be taken to hold the soldiers responsible for the assault. Other than cuts and bruises, the women suffered no serious injuries.

Tensions have been rising in Jerusalem in recent weeks, after Palestinians re-entered the Al-Rahma Gate area of Al-Aqsa Mosque and performed prayers there for the first time in over 15 years. However, Israeli Prime Minister Benjamin Netanyahu has affirmed that his government intends to close the gate once again, despite condemnation from Palestinian officials.

Last week, Israeli forces entered the Al-Rahma prayer area with their shoes on, in what was seen as a deliberate attempt to provoke Palestinian worshippers.

For Nour, whose mother is originally from Gaza, her experience is reflective of the reality Palestinian worshippers regularly face.

“We’ve always seen these things on TV and on Facebook, you’ve become numb to it. But actually experiencing it and witnessing the reality of the Palestinians is something completely different. It changed my perspective and honestly we are just scratching the surface of what they go through every day,” she concludes.

Under the status quo agreement on Jerusalem, Israeli forces are not permitted to enter Al-Aqsa Mosque, which is under the management of the Jordanian Waqf (religious endowment), or physically attack worshippers.

However, Israeli settlers regularly storm the compound in coordination with Israeli forces, performing rituals and pledging to destroy the mosque, whilst Muslim worshippers are harassed or barred from entering. Extreme settler groups have repeatedly called for increasing raids of the holy site, especially on significant Jewish holidays.