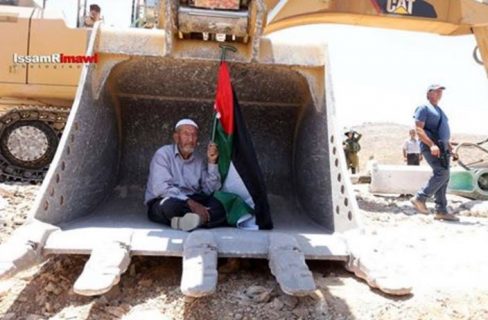 Villagers of Deir Qiddees and Ni’lin, in the central West Bank district of Ramallah, along with international solidarity activists, managed to stop Israeli bulldozers from uprooting Palestinian lands, despite Israeli military assaults and violations.

The Palestinians and solidarity activists held protests, Wednesday, in front of the Israeli military bulldozers and managed to remove the soldiers and their equipment out.

Mohammad ‘Ameera, the coordinator of the Popular Committee against the Wall and Colonies, said the protests were held in coordination with the Ni’lin Village Council, Popular Committees in addition to international and Israeli activists.

Ameera added that the soldiers repeatedly tried to remove the protesters, but they remain steadfast, and stopped the bulldozers, forcing the army to leave the area.

The army started bulldozing the lands more than four days ago, in order to widen road #446 used by Israeli colonists, living in illegal colonies built on privately-owned Palestinian lands.

The lands are owned by Palestinian villagers from Deir Qiddees and Ni’lin and are subject to frequent violations due to Israel’s illegal attempts to annex them to widen the road.

It is worth mentioning that Israeli police officers ticketed several cars owned by journalists who were reporting on the event, and forced them away.