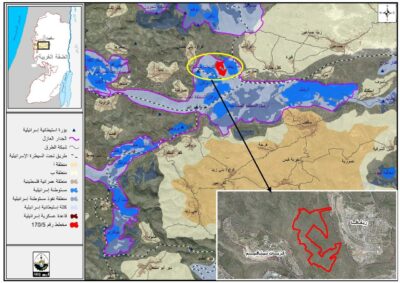 BETHLEHEM, Thursday, August 11, 2022 (WAFA) – Israeli authorities today approved a plan to establish a new illegal settlement on Palestinian-owned lands in the village of Deir Istiya, in the governorate of Salfit.

The Applied Research Institute (ARIJ) said in a statement that the total area of the land which will be seized for the implementation of the settlement plan reaches 259 dunums.

ARIJ added that the plan aims to build 381 new housing units in the new settlement, in addition to buildings, open areas, and streets to link it to surrounding areas.

Arij noted that the new settlement is located between the settlements of Revava and Kiryat Netafim, which warns of Israeli authorities’ intention to create a settlement complex containing the three settlements, in addition to the Barkan settlement.