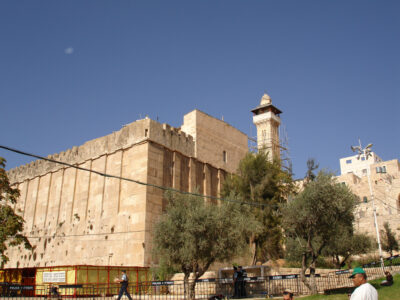 “The Ibrahimi Mosque is an Islamic Mosque and a worship place for Muslims alone,” the Mufti said in a statement. “What the US vice president did was a provocative act and extremely dangerous. The occupation authorities bear its consequences.”

The Mufti, who is the highest Muslim religious authority in Palestine, said Israel allowed Jews to pray at the Ibrahim mosque, also known as Cave of the Patriarchs, after dividing it between Muslims and Jews following the massacre in which a Jewish settler member of the terrorist Israeli Kach movement opened fire at Muslims performing the early morning prayer in the mosque on February 25, 1994, killing 29 people and injuring dozens of others.

The Israeli government, after the massacre, punished the Palestinian victims and rewarded the criminals when it divided the mosque and allowed Jews to pray at certain areas of it, occasionally restricting access of Muslims to it or banning the call for prayer from its minarets.

Sheikh Hussein called on the Arab and Islamic worlds, as well as the Organization of Islamic Cooperation, the Arab League, and UNESCO, which in July 2017 passed a resolution designating the Ibrahimi Mosque as a Palestinian world heritage site in danger, as well as international organizations to provide protection to the religious holy sites in occupied Palestine and prevent Israeli takeover of the Ibrahimi Mosque and changing its Islamic character.

Pence yesterday toured the Ibrahimi Mosque accompanied by far-right-wing and fascist Israeli member of parliament, Itamar Ben Gvir, who is currently leading a campaign to uproot several Palestinian families from their homes in Sheikh Jarrah neighborhood of occupied East Jerusalem and replace them with Jewish settlers, and Baruch Marzel, member of the Kach terror group who was banned from running for parliament elections due to his extreme right-wing and racist views against Palestinians and Arabs in general and incitement to violence.