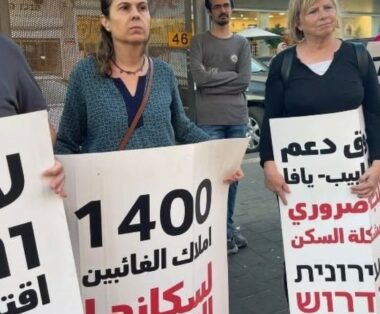 YAFA, Friday, November 25, 2022 (WAFA) – Arab factions in Israel staged a protest today in the Arab city of Yafa against an Israeli plan to ethnically cleanse 1,400 indigenous Arab citizens from the city.

The protesters raised placards with slogans expressing rejection of the Israeli eviction plans under the Absentees’ Property Law of 1950.

Under this law, hundreds of indigenous Palestinian families could be evicted from their homes in favor of Israeli settlers.

The placards at the protest read: “Absentee property for indigenous residents, not for investors” and “uprooting inhabitants and Judaising the city is a timebomb”.

Meanwhile, the protesters called for all Arabs in Israel to stand against the Israeli eviction plans aimed at reinforcing the apartheid regime.

Most of Yafa’s Palestinian population were forced to flee the city during the 1948 ensuing ethnic cleansing of more than 600,000 Palestinians by invading Zionist militias.

However, a community of approximately 15,000 Palestinians, who now hold Israeli citizenship, are still present in their ancestral land.

They organise weekly protests against Israeli plans, with the aim of protecting their existence.