Wounded Palestinian, Who Burnt Him Self Demanding Medical Care, Dies In Gaza 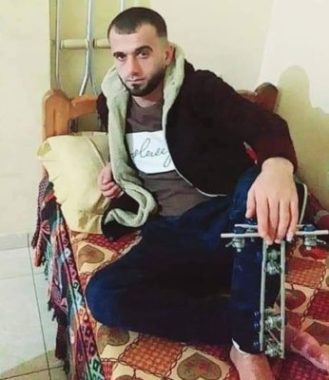 A young Palestinian man, who was shot with several Israeli army live rounds on April 16, 2018, and torched himself two weeks ago after his repeated calls for medical treatment abroad went unanswered, has died from his serious wounds, on Tuesday evening.

Media sources said the young man, Bilal Mohammad Masoud, 24, from Jabalia refugee camp in northern Gaza, has succumbed to his serious wounds at the Intensive Care Unit of the Shifa Medical Center, in Gaza.

The Palestinian was shot by Israeli soldiers, on April 16th, 2018, who fired live rounds at him, wounding him in his arm and legs, causing serious bone fractures and fragmentation, before he underwent several surgeries, including bone grafting, but his condition never improved.

He was shot while participating in the Great Return March processions by soldiers, stationed across the perimeter fence, near Abu Safiyya area, east of Jabalia in northern Gaza. His family said that they have appealed for help from several parties in the Gaza Strip, including Hamas ruling party, in addition to Palestinian President Mahmoud Abbas in the West Bank, to ensure his transfer to a hospital in Egypt or any other country.

According to his sister said, the family tried to transfer him for treatment in Egypt but was denied entry by the Egyptian Authorities.