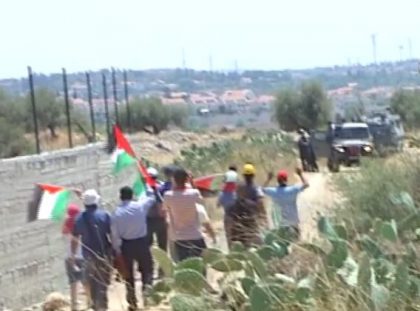 Israeli soldiers attacked, Friday, the weekly nonviolent protest against the Annexation Wall and colonies in Ni’lin village, near the central West Bank city of Ramallah, causing one Palestinian to suffer a fracture in his arm, and many others suffered the effects of teargas inhalation.

He added that a young man was shot with a gas bomb in his arm, causing a fracture, while many protesters suffered the severe effects of teargas inhalation.

The protesters carried posters of Mousa and the Dawabsha family, in addition to pictures of hunger striking detainee, Bilal Kayed.

The soldiers also assaulted Palestinian journalists and tried to force them away, leading to an argument with Palestine TV an anchor, Journalist Ali Dar Ali.