10 Palestinians Detained, One Summoned for Questioning in Jerusalem 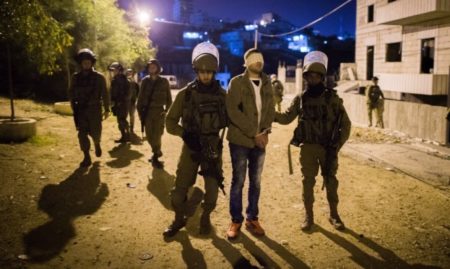 At least 10 Palestinians were detained by Israeli occupation forces, on Saturday night, in a protracted crackdown which has targeted the occupied East Jerusalem neighborhood of al-‘Isawiya since June of 2019, the Palestinian News and Info Agency reported.

Local sources stated that Israeli police forces broke into the flashpoint neighborhood, and searched several homes before detaining 10 Palestinian civilians, an eleventh was summoned for questioning by the Israeli intelligence.

After nearly six months of unrest in al-‘Isawiya, with excessive police brutality, indiscriminate and unjustified daily invasions by Israeli forces have left residents of the Jerusalem district exhausted, with no end in sight.

Since June of 2019, dozens of heavily armed Israeli forces from the Border Guards Police and Riot Police units have stormed al-‘Isawiya on a daily basis, searching homes and arresting dozens of civilians under the pretext of ‘security’.

In a statement, Amit Gilutz, spokesman for the Israeli human rights group B’Tselem, stated that Israeli forces have been “detaining hundreds of residents, including minors, issuing traffic tickets for spurious infractions, serving of house demolition orders, and acts of violence.”