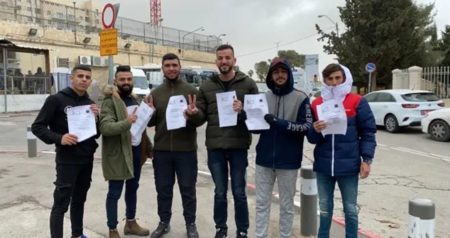 According to the British Emergency Law of 1945, Israeli occupation authorities have applied the procedure of night home arrest on a group of Jerusalemites youth in al-Isawiyya town, north of occupied Jerusalem. Two specialists have considered the move illegal and out of alignment with international law, and a blatant violation of human rights.

Israeli occupation authorities imposed night home arrest, against nine Jerusalemite youth from al-Isawiyya, for different periods varying from 3-4 months, under the pretext of participating in confrontations with Israeli soldiers.

They have expressed their refusal of the decision, stressing their right to free movement without restrictions, decisions and laws.

They explained that an Israeli intelligence officer threatened them with actual arrest or deportation to Gaza, in the case they do not adhere to the decision handed to them. He also informed them that they will raid their homes during period, from 8 pm until 6 am.

According to Al Ray, the military informed the young men that it is to issue night home arrest orders under the emergency regulations established by the British Mandate.

The lawyer Jad al-Qadmani said that Israeli use of old British emergency regulations, to impose night home arrest on Palestinian youth, constitutes a blatant violation of the right to free movement.

He explained that the law of night home arrest contradicts Israeli law and other laws, since any regulation that restricts the movement of people is considered illegal.

He added that the law must not be applied in the presence of other laws and legislation, and it cannot be dealt with, because it depends on an old and unjust regulations.

Israeli authorities resort to this law in order to apply a policy that seeks to constrict the life conditions of Jerusalemites in al-Isawiyya.

The law of home arrest, has been used in limitation, in past years, applied only on Palestinians, giving Israeli army officers the authority to enforce their policies.

The six who were detained in al-Isawiyya were released because there is no evidence against them.

British emergency  regulations gave Israeli leadership a wide authority to use administrative detention and to demolish Palestinian homes in the West Bank.

Chairman of the Committee of the Families of Jerusalemites, Amjad Abu Asab, said that Israeli occupation authorities create new and unfair methods against Palestinians in Jerusalem in order to create terror, fear, frustration and despair in their hearts, in order to tighten their control over them.

Authorities use British Emergency Law to overcome any procedure that Jerusalemites may use against the law, since it has no appeals and is based on matters that have no basis in existence.

Abu Asab described the law as racist, unjust, and in contradiction of international law because the legislator and the executor is the occupation.

He further explained that the occupation decides these measures to pass available political decisions aimed at completing its Judaization projects in Jerusalem.

Emergency regulations constitutes an open and wide gate that could affect a large group of Jerusalemites, in coming days.

About 700 Jerusalemites have been taken over the last eight months, from  al-Isawiyya town, which has been subjected to numerous Israeli violations and attacks.