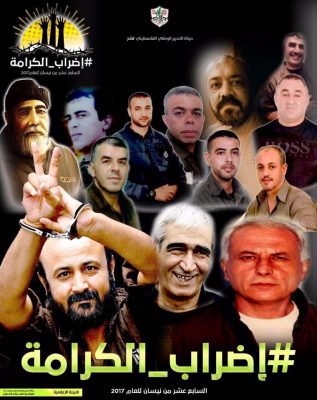 More than 1300 Palestinian detainees, held by Israel, initiated the first day of hunger strike, on Monday April 17th, which also marks the Palestinian Prisoners’ Day, while hundreds of detainees are preparing to join the “Strike For Dignity.”

All detainees in Asqalan, Nafha, Ramon, Hadarim, Gilboa’ and Be’er as-Sabe’ (Beersheba) have returned their meals, declaring the beginning of their open-ended hunger strike.

Issa Qaraqe, the head of the Palestinian Detainees and Ex-Detainees Committee, stated that the detainees are protesting the escalating Israeli violations, including medical neglect, arbitrary Administrative Detention, denying the family visits and solitary confinement.

He added that hundreds of detainees intend to join the strike in the coming few days.

Israel is holding captive at least 6500 Palestinians, including 300 children, 19 mothers, and 500 who are held under Administrative Detention orders without charges or trial.

Among the detainees are 13 elected legislators, two former government ministers, 28 journalists and hundreds of academics.

1800 detainees suffer with various illnesses, including 180 who are facing life-threatening conditions and 26 cancer patients, in addition to 80 disabled Palestinians.