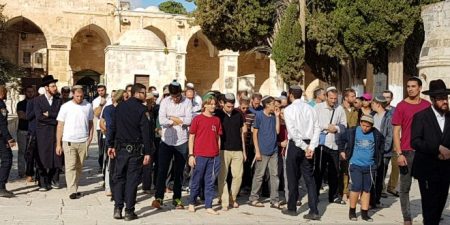 154 settlers stormed Al-Aqsa Mosque, under heavy guard protection from the Israeli forces on Thursday morning. Settlers raided the area from Al Maghariba Gate, through small groups, and carried out suspicious and provocative tours in the holy site.

The first group of settlers came  in the morning, while other groups were preparing to break into the mosque protected by large numbers of Israeli soldiers who surrounded them while walking in the squares of Al-Aqsa, turning it into a barricade, according to local media.

According to the PNN, the settlers deliberately defile the courtyards of the mosque , raiding it early every day at 7 am, taking advantage of the small number of people at the mosque, at this time, and the protection of Israeli forces.