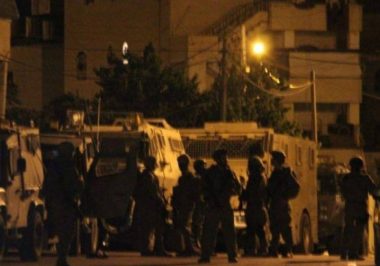 Israeli soldiers abducted, on Thursday at dawn, several Palestinians during invasions and searches of homes in the occupied West Bank, and clashed with many youngsters near Jerusalem.

The Israeli army said it arrested, in Beit Surik village, northwest of occupied East Jerusalem, several relatives of Nimir al-Jamal, 37, who opened fire, on Tuesday morning, on a group of Israeli Border Police officers, and armed security guards, killing three and wounding a fourth at the main entrance of Har Hadar illegal colony, before he was shot dead.

One of the abducted Palestinians has been identified as Rami al-Jamal, who was taken prisoner from his home.

The Israeli army said it will continue its operations in Beit Surik, and surrounding areas, and added that the soldiers also “managed to local and confiscate two pistols and fifty unregistered vehicles.”

The soldiers also forced many Palestinians to erase political graffiti from many walls in the village.

In a statement, the military said its soldiers have arrested four Palestinians in the West Bank.

The army added that it confiscated dozens of work permits, that were previously given to relatives of al-Jamal.

In addition, the soldiers invaded several areas around Al-Quds University, in Abu Dis town, east of Jerusalem, and clashed with many youngsters, who hurled stones and empty bottles at them.

The soldiers fired many gas bombs, concussion grenades and rubber-coated steel bullets. There have been no immediate reports of injuries.