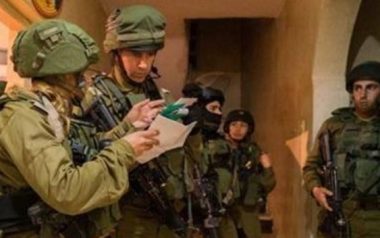 Israeli media sources reported Friday that an 18-year old Palestinian was in custody after having been beaten unconscious with rocks and clubs, by a crowd that suspected him of shooting and injuring two Israelis, then stabbing another with a screwdriver after his gun jammed.

In addition to the three people injured by the attacker, two people were admitted to the hospital for bruises sustained falling down while running, and three other people were treated for shock by Israeli medics.

The 18-year old Palestinian man from Nablus who is currently in Israeli police custody is suspected of carrying out the attack, but it is unclear from local reports whether he was actually witnessed attacking anyone.

Israeli newspaper Ha’aretz reported that the 40-year old Israeli who was stabbed by the screwdriver told them, “I stood on Salor Street and I heard shots and shouts of ‘terrorist, terrorist.’ I saw the terrorist running. He entered a sewing shop and tried to stab me. He somehow stabbed me with a screwdriver and then all the rest entered. We were four to five people who beat him into submission because he did not want to give up. They beat him with a club and a stone.”

The attack took place Friday morning at the open-air market of Petah Tikva, in central Israel. According to Israeli sources, the suspect opened fire toward the crowd, lightly injuring two people with gunshot shrapnel wound, then ran down Baron Hirsch Street and into a sewing shop.

In the shop, police say that he grabbed a screwdriver and stabbed an Israeli man in the neck, moderately wounding him. But the wounded man remained conscious, and was able to give media reporters the full statement quoted above.

Also on Friday at dawn, the Israeli army invaded Beita village, south of the northern West Bank city of Nablus, before breaking into the home of Sadeq Nasser Oweida, 18, who is suspected of carrying the attack out, and interrogated his family while searching their property.

His father, Nasser, who works in Israel, was taken prisoner minutes after the son was injured and detained. Furthermore, the soldiers invaded and searched homes in Beita al-Fouqa village, near Nablus, and abducted two Sadeq’s friends. They have been identified as Hamza Abdul-Ra’ouf al-Jaghoub, 19, and Adham Lutfi Ghazi, 19.

The soldiers also invaded Osreen nearby village, and abducted Samer ‘Odeili, 24, in addition to confiscating his car, allegedly for driving Sadeq from Beita to Azzoun, near Jenin, before he crossed the Green Line into Israel.

The invasions and violent searches of homes, in addition to the interrogation of many Palestinians in Beita and Osreen, lasted for more than three hours.