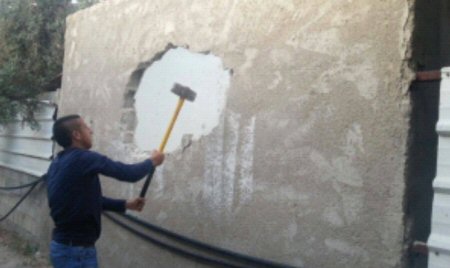 The Israeli municipality ordered 2 Palestinian families to demolish their own homes on Saturday – one in the Jabal al-Mukabbir neighborhood, and the other in Silwan neighborhood, both in occupied East Jerusalem.

Ali Jaabis, one of the 8 members of the Palestinian family, from Jabal al-Mukabbir, newly homeless, described Israel’s threats of fines, and demolition costs if they did not demolish it themselves.

Ali Jaabis told Ma’an News Agency that the family had been trying to obtain a permit for several months, adding that they already paid the fine for building without a permit.

Israel enforces home demolition under the pretext that the homes are built without a permit, a permit which is next to impossible for Palestinians to obtain from the Israeli authorities.

Atallah Eleiwat, also demolished his own home on Saturday, in Silwan, where their family of 7 lived. Eleiwat told Ma’an that he has been unable to obtain a license, after 8 years of trying.

For Jewish Israelis in occupied East Jerusalem’s settlements, the planning, marketing, development, and infrastructure are funded and executed by the Israeli government.

For Palestinians, the responsibility is on the individual to pay the excessive fees, arbitrarily dictated by Israel, for no other reason than a means of oppression.