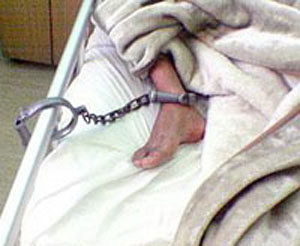 Huthayfa Halabiyeh, 28, from the town of Abu Dis near Jerusalem, has been on hunger strike for 67 days, and was recently admitted to hospital due to deterioration in his health. Today his fast ended after reaching an agreement with the Israeli authorities on his release.

Head of the Prisoners Commission, Qadri Abu Baker, told WAFA that Halabiyeh’s lawyer and the Israeli Prison Service (IPS) reached an agreement setting a date for his release.

Halabiyeh has been held in administrative detention without charge or trial since June 10 of 2018 and had his sentence renewed three times. He decided to go on hunger strike more than two months ago to force his release.

Another Palestinian detainee, Fadi Yousef Hroub, 31, from Deir Samet village in the southern West Bank, ended his hunger strike today after he was promised that his administrative detention order will not be renewed.

With Halabiyeh and Hroub ending their strikes, six other detainees remain on hunger strike demanding their release, according to the Prisoners’ Commission.