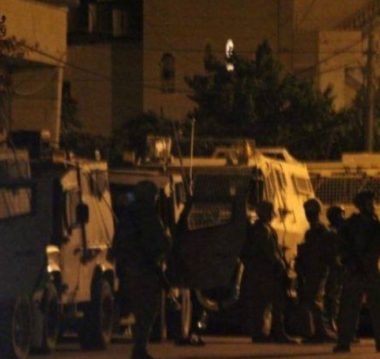 Israeli troops abducted 21 Palestinians in a number of raids across the West Bank in the early morning hours on Monday.

According to a statement by the Palestinian Prisoners Society,  Israeli troops abducted 21 Palestinians in multiple raids across Ramallah and al-Bireh district.

In addition, one Palestinian was abducted from Abu Dis, in East Jerusalem.

In the northern West Bank, Israeli military invasions resulted in the abduction of three Palestinians from their homes: one from Nablus, one from Salfit and one from Jenin.

These raids take place on a nightly basis in Palestine, as Israeli forces invade Palestinian towns and villages to take into custody any Palestinians they deem as ‘wanted’. Many of those abducted are taken into Israeli prison camps and held without charges for years on end in so-called ‘administrative detention’.

Nearly 6,000 Palestinians are currently being held as political prisoners inside Israeli prison camps. Under its role as an occupying power, according to the Fourth Geneva Convention, Israel has no jurisdiction to detain Palestinians. And holding anyone without charges is a direct violation of international law.