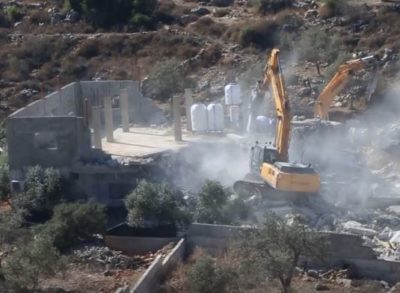 Salfit’s governor, Abdullah Kmeil, said that the Israeli authorities are using the coronavirus crisis to escalate demolitions against Palestinians while also expanding settlements in the occupied West Bank.

Kmeil appealed to human rights groups and all Palestinians to stand up against the occupation state’s attempts to displace more Palestinians, in contravention of international law.

According to the latest United Nations Office for the Coordination of Humanitarian Affairs (OCHA) report on demolitions;

In March, 2020, Israeli authorities demolished or seized 43 Palestinian-owned structures, displacing 31 people and otherwise affecting the livelihoods, or access to services, of 260 others. All but two structures were located in Area C or East Jerusalem and were targeted due to a lack of building permits.

This decline is due to the Israeli authorities’ decision to suspend demolitions of inhabited homes during the current COVID-19 emergency. The continuous targeting of other structures, particularly water and hygiene-related structures, is of growing concern in vulnerable communities in the context of the spread of the virus.

In Ibziq (Tubas), a community located in a closed ‘firing zone’ for military training, the Israeli military demolished one home and seized eight tents provided as humanitarian aid. Four of the tents were to be used as temporary shelters, and the other four for a mosque and a clinic. During the incident, the Israeli forces seized another six donor-funded disinfectant sprayers provided to mitigate the risk of COVID-19.