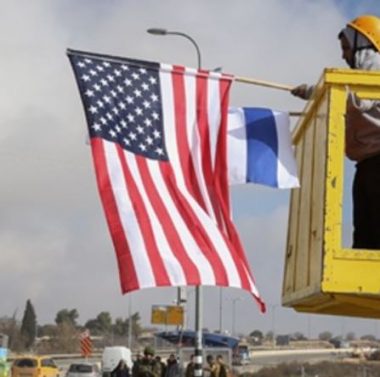 Dozens of Americans flags have been raised, Thursday, at the junctions and roads leading to the Gush Etzion Israeli colony, built on Palestinian lands south of the West Bank city of Bethlehem, as the “Settlements Council” is preparing to celebrate Trump’s inauguration and the pending approval of 2700 news colonialist units.

The colonist settlers started raising the American flags on electric poles and junctions in preparation for their celebration of U.S. President-elect Donald Trump, which they say is the first step for the approval of thousands of units, in the occupied West Bank.

“For the past eight years, every time Benjamin Netanyahu said we plan to build; the White House prevented him from doing so,” an official told Channel 2, “Now we have additional 2700 units that we can get approved, and we hope that the new U.S. President will be a great motivator.”

“We are already on contact with the upcoming Trump administration; the Settlements Council has three permanent representatives in Washington, and will attend the inauguration, “the source added, “The moment pressures are lifted, the Prime Minister (Benjamin Netanyahu) will have an easy time approving new constructions. We are raising the American flags to express our full support and appreciation for Trump.”

All of Israel’s colonies in the occupied West Bank, including those in and around occupied East Jerusalem, are illegal under International Law, the Fourth Geneva Convention, to which Israel is a signatory and a constant violator, and various international treaties.