36 Days After Killing Her, Israeli Army Transfer Corpse Of Child To Her Family 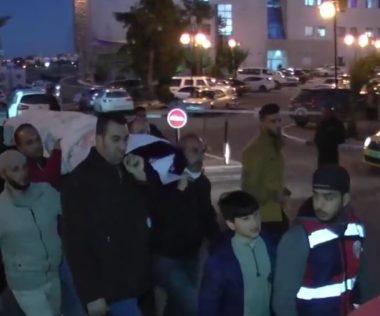 The Israeli Authorities handed, late of Friday evening, the corpse of a Palestinian child to her family, 36 days after killing her and holding her body.

Media sources in Ramallah said the soldiers delivered the corpse of Samah Zoheir Mubarak, 16, to the Palestinian Red Crescent, before it was sent to a local hospital.

Her body was transferred from the Israeli side to the Palestinians at the Ofar military roadblock, west of Ramallah, in central West Bank.

It is worth mentioning that Mubarak was killed by Israeli soldiers, on January 30 2019, after the soldiers claimed that she attempted to stab them.

Samah was walking in an area of the military roadblock only designated for vehicles and not pedestrians when she was fatally shot from a close range. The Border Police examined her schoolbag, which was filled with books, and school stationary.

She was left bleeding on the ground and died from her wounds. She is from Nusseirat in Gaza, but her family moved to Umm ash-Sharayet neighborhood in the central West Bank city of Ramallah and was an eleven-grade school student.