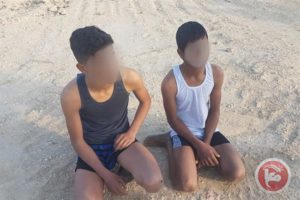 Two young Palestinian boys were detained by Israeli forces on Friday, after they were caught crossing the border fence, between Israel and the southern Gaza Strip.

The boys, who have not yet been identified, were searched, and found to be in possession of three knives, according to Israeli army spokesman, Maan News Agency reported.

The Palestinian Territory of Gaza has been under a land, air, and sea blockade by Israel and Egypt since 2007. Israel has waged 3 military campaigns against Gaza (Hamas) in 2008/9, 2012, and 2014, killing thousands of Palestinian civilians, including hundreds of children.

Of the 1,800,000 Palestinians living in Gaza, 1,400,00 are registered refugees, the children and grandchildren of Palestinians forced out of their homes in 1948 during the creation of the state of Israel.