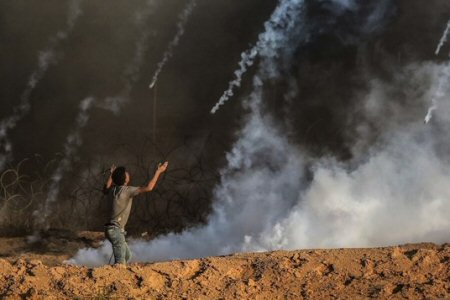 Four Palestinians were injured, late Thursday, along the eastern borders of the besieged Gaza Strip.

Ayman al-Subhani, head of the emergency department at Shifa Hospital, said that three Palestinians were injured by Israeli live ammunition, east of Gaza City, and were transferred to the hospital to receive the necessary medical treatment.

Medical sources confirmed that a fourth Palestinian was injured after Israeli forces opened fire at him to the east of Jabalia, in the northern Gaza Strip, while dozens of others suffered from tear-gas inhalation.

The medical condition of the four injured remained unknown, according to Ma’an.

For the past several weeks, hundreds of Palestinian protesters, have been organizing, as well as participating in night protests, during which they set tires on fire and chant slogans through loud speakers, while marching towards the border with Israel; these protesters are also known as the “Night Confusion” unit.