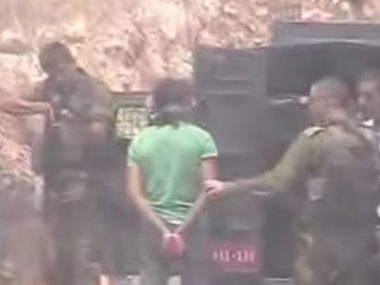 Last week, Israeli soldiers kidnapped resident Jamal Hussein Ameera, 50, after his daughter managed to capture on film an Israeli soldiers shooting a Palestinian youth after they detained and handcuffed him. The father was sentenced on Tuesday to one hundred days imprisonment. (Video of the shooting embedded at the end of this article)

The father was kidnapped by the soldiers less than a week after the story was exposed as the footage showed one of the soldiers aiming at the leg of the bound Palestinian youth and shooting him.

Ameera was kidnapped while working in his olive orchard close to an area where the Annexation Wall is being constructed.

The youth, shraf Abu Rahma, who was shot by the soldier was kidnapped by the army during a peaceful process against the Wall., on  July 7.

Abu Rahma was cuffed by the soldier and was beaten before one of the soldiers shot him in the leg.

On July 20, The Israeli Information Center for Human Rights in the Occupied Territories (B’Tselem) published the footage which showed a soldier firing a rubber-coated steel bullet, at extremely close range, at Abu Rahma who was cuffed and blindfolded.

The attack occurred about two weeks ago in the presence of soldiers, among them the battalion commander, a lieutenant colonel, who held the Palestinian’s arm while the soldier fired.

The group added that until the video footage was published, the army did not conduct any probe and only settled for debriefing.

B’Tselem stated that the debriefing reached the desk of the West Bank Division Israeli military commander but he failed to report it to the Military Police or the Judge Advocate General’s Office, or to take any measures against the soldier or the battalion commander.

Residents of Ni’lin stated that, the day after the incident, they saw the soldier still serving in his unit, B’Tselem reported.

The soldier in question told investigators that he was ordered by the battalion commander to shoot the bound Palestinian youth. The commander claimed that he “only ordered the soldiers to frighten Ashraf”.