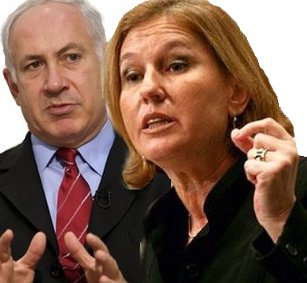 Israeli Prime Minister, Benjamin Netanyahu of the Likud Party, traded accusations with Israel’s opposition leader of the Kadima Party, Tzipi Tivni, over what they described as “concessions made to the Palestinians.”The stand-off took place during a Knesset session, Tuesday evening, when Netanyahu told Livni that she “has no clue on how to deal with the issue of Palestinian homemade shells fired from the Gaza Strip.”

Netanyahu also told Livni that she, and former Prime Minister, Ehud Olmert, made lots of concessions to the Palestinians but was never able to achieve peace.

In response, Livni said that Netanyahu has no political integrity and never committed himself to what he promised the public.

“You [Netanyahu] know now that what you sold to the public is impractical,” Livni said. “Political integrity obliges you to be committed to what you promised the public.”

She also stated that Netanyahu does not realize that wasting time does not help maintain the identity of Israel as a Jewish state.

On his part, Netanyahu said that Livni and her predecessor, Ehud Olmert, think it is sufficient to ask for guarantees that the resistance in Gaza will refrain from firing homemade shells Into Israel.

“You and Olmert made lots of senseless concessions after you failed to reach a deal with the Palestinians,” Netanyahu stated. “Is Israel obliged to implement your concessions? You should tell us about everything what you gave up, about your concessions.”