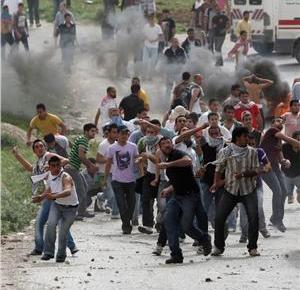 Clashes were reported on Tuesday morning in several parts of East Jerusalem’s Old City and its surrounding neighborhoods as the Israeli police attacked the areas in question after the residents held a strike to protest Israel’s violations and settlement activities in the city.At least nine residents were wounded as the army used excessive forces against the protestors.

The clashes took place after fundamental settler groups started the construction of a synagogue near the Al Aqsa mosque in East Jerusalem.

They were concentrated in the Shu’fat refugee camp, Wad Al Joz, Al Esawiyya, Silwan and several neighborhoods in the Old City especially in Hatta, Al Sa’diyya and Al Wad neighborhoods. The three neighborhoods are physically attached to the Al Aqsa Mosque.

Dozens of residents hurled stones at Israeli soldiers stationed at a roadblock at the entrance of the Shu’fat refugee camp, north of Jerusalem.

Army sources reported that the residents hurled stones and empty bottles at soldiers manning the roadblock, and that enforcements were called to the scene.

The soldiers and policemen fired gas bombs, concussion grenades, and rubber –coated bullets at the residents, and also fired rounds of live ammunition into the air.

Two youths, who were passing through the area, were kidnapped.

Clashes also took place in several parts of the Old City, especially in Wad Al Jouz while the police chased dozens of residents.

The police also used excessive force against protestors at Al Nather Gate, one of the gates of the Al Aqsa Mosque.

Clashes also took place in Qalandia refugee camp, north of Jerusalem, while the police fired live rounds and rubber-coated at school children. Troops kidnapped a 15-year-old child and took him to a local interrogation center.

An Israeli police spokesperson reported that two policemen were mildly wounded in the Old City.

The police earlier kidnapped Eyad Al Taweel, 12, and took him, along with his two aunts, to an interrogation center; the police also kidnapped three youths.

Israel imposed a strict siege on the Old city, especially the gates of the Al Aqsa mosque, and prevented the residents, including dozens of senior women, from entering in.

The police kidnapped a 39-year-old man from the Majd Al Kroum town, north of the country, after claiming that he attacked a police officer.

The police also installed dozens of roadblocks at the entrances of Arab towns in the country and ordered the inspection of all Arab vehicles.

Roadblocks were installed in Acre, Safad, several junctions in the Galilee and around Jerusalem after claiming that hundreds of residents from the country are trying to reach the Al Aqsa Mosque.

Palestinian factions stationed in Syria called on the Palestinians and their factions in Palestine to counter the Israeli violations by all means and to protect the Al Aqsa Mosque.

Khalid Mashal, head of the political bureau of the Hamas movement, called on the Arab countries and the Palestinian Authority of Mahmoud Abbas, to stop all talks with Israel.