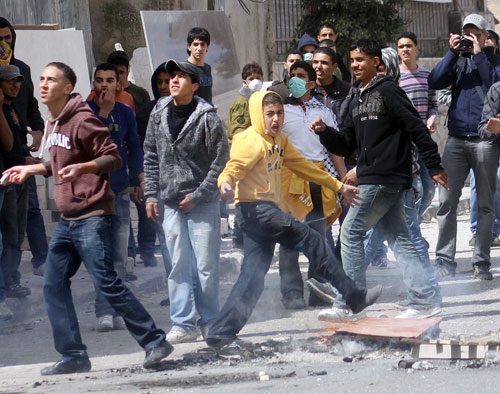 At least 38 Palestinians civilians were injured by Israeli police fire on Tuesday during the ongoing clashes in East Jerusalem.
Palestinian medical sources reported that most of those injured in Jerusalem today were hit with rubber-coated-steel bullets. Troops also used tear gas and sound bombs to suppress the protests today.

The clashes took place after fundamental settler groups opened on Monday a synagogue near the Al Aqsa mosque in East Jerusalem. Tension was high in Jerusalem as Israeli announced 50, 000 settlers’ homes in the city last week.

Last Friday Israeli announced a lockdown around the West Bank and Jerusalem; which means closing the city of Jerusalem in front of the few Palestinians from the West Bank who has permission to enter it.

At Jerusalem’s old city police stopped all Palestinians under the age of 50 from entering the old city.

The Clashes today were consternated at Al Essawyiah, a Palestinian town near Jerusalem’s old city. Clashes took place all over the city early on Tuesday morning.