Qassam Shell From Gaza Kills a A Kibbutz Worker, War Jets Bombards Targets In The Strip 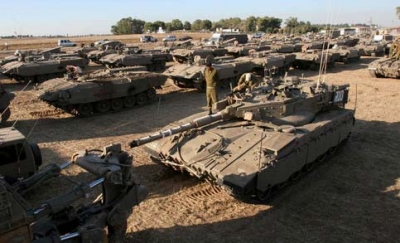 One foreign worker was killed on Thursday in the Nativ Ha’asara kibbutz by a Qassam home-made shell fried form Gaza.
Nativ Ha’asara is located near the Gaza Strip. The Israeli army radio said that shell is the third to be fired at Israeli areas neighboring Gaza in the past 24 hours.

Shortly after, Israeli fighter-jets bombarded a number of locations in the coastal enclave. Palestinian sources reported damage to property but no injuries.

This Wednesday at noon, Israeli troops fired upon a nonviolent protest against the Wall in central Gaza Strip.

Last week Israeli tanks stationed at the border with Gaza fired at a number of Palestinian and homes; damage and injuries were reported.

No group has yet claimed responsibility for firing the home-made shell on Thursday. But this week Palestinian armed resistance groups in the Gaza Strip warned that they will resume the firing of home-made shells should Israel continue to target Palestinians in Jerusalem.

38 Palestinians were injured, 60 others were arrested by the Israeli police in Jerusalem this week during anti settlement construction protests in the city.