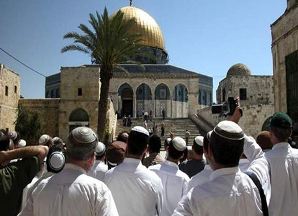 Three Israeli Knesset members of the National Union fundamentalist party stated that they intend to tour the yards of the Al Aqsa Mosque in Jerusalem on Wednesday. The three, Uri Ariel, Michael Ben-Ari, and Arieh Eldad, said that the motive of this tour is to protest the cancellation of “festivities in the yards and around the gates” of the Al Aqsa mosque.

The fundamentalist members of Knesset said that East Jerusalem is part of the “capital of Israel” and will always be part of the “Jewish State”.

Their statement came only one day after Israel’s Prime Minister, Benjamin Netanyahu, said that settlement construction in East Jerusalem will continue and that Jerusalem “is the eternal capital of Israel”.

The United States said that settlement construction in Jerusalem threatens the efforts to resume the peace process in the Middle East.

East Jerusalem is part of the Palestinian territories Israel illegally captured in 1967 and later annexed. The Palestinians seek it as the capital of their future state. The Israeli control over Jerusalem is illegal and violates the International Law.