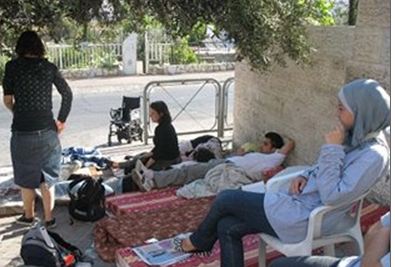 The Jerusalem Center for Social and Economical Rights (JCCER) reported that the Israeli police handed Wednesday a Palestinian family from East Jerusalem an order to pay 13.000 NIS, demanding family members to pay the expenses of their expulsion from their home. Members of Majed Hannoun family, from Sheikh Jarrah neighborhood, were forced out of their home last year and were replaced by fundamentalist Jewish settlers.

But now, the settler-run Jerusalem Municipality is asking the family to pay 13.000 NIS for the expenses of the workers who removed them from their homes, and for equipment the municipality used during the evacuation.

The Research and Documentation Unit at the JCCER reported that two other families who were also forced out of their homes in Sheikh Jarrah last year, fear the same measure would be taken against them.

The families of Maher Hannoun and Abdul-Fattah Al Ghawi were forced out of their homes and fundamentalist settlers threw their furniture and belongings in the street.

The Jerusalem municipality later moved the furniture to a square in front of the City Hall building in Sheikh Jarrah.

The two families are now living in tents and fear that Israel will also attempt to oblige them to pay the expenses of their evacuation.

The Jerusalem Municipality repeatedly removed the tents and tried to force the residents our of Sheikh Jarrah.

This issues comes amidst ongoing Israeli violations against the Palestinian natives of Jerusalem, and amidst ongoing settlement construction and expansion in the city and around it.

This is also part of Israel’s police to demolish Arab and Palestinian homes in East Jerusalem.