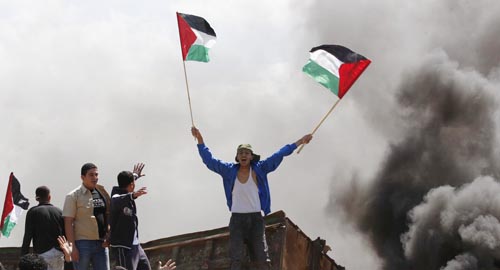 Important Update:
Palestinian media sources reported that Mohammad Al-Faramawi, 16 who was reported dead during Land Day activities in the Gaza strip, on March 30, is still alive. Local sources reported that Al-Faramawi was detained by the Egyptian border police, who released him few days later.Apparently the Egyptian police did not inform the Palestinian Authorities of detaining Al-Faramawi,which led to the belief that he was killed because he disappeared.

One Palestinian child was killed, 16 others injured, one critically when Israeli troops opened fire at Land Day protests at a number of locations in the Gaza Strip.

In one of the Protests people gathered at the Israeli-bulit wall near the International airport in Rafah city, southern Gaza Strip. Troops opened fire at civilians killing 16 year old Mohamed Al Faramawi.

At the same time another protest marking land day started at Khan Younis town, south east of The Gaza Strip.

People reached the buffer zone at the borders with Israel. Soldiers stationed at the borders opened fire at protesters injuring 16 civilians. Among those injured was nine year old Ra’ed Abu Namous; he was critically injured when a live round hit him in the head, Medical sources reported.

In the ensuing confrontations at the time with the Israeli army and police, six Palestinians were killed, about one hundred were wounded, and hundreds of others arrested by the Israeli police. Today Land Day is an important annual day of commemoration in the Palestinian national political calendar, it is marked not only by Palestinian- citizens of Israel, but by Palestinians all over the world.