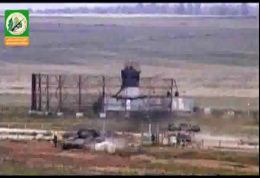 The Al Qassam Brigades, the armed wing of the Hamas movement, published a video documenting Friday clashes with Israeli soldiers and undercover forces infiltrating into Khan Younis, in the southern part of the Gaza Strip. The clashes led to the death of two Israeli soldiers. The video clearly shows undercover forces of the Israeli army infiltrating into Gaza after crossing the border fence, and trying to advance towards the west.

It also shows soldiers being shot by Palestinian fire and shows enforcements and tanks invading the area in an attempt to evacuate the wounded soldiers.

Ambulances were also filmed while evacuating the killed and wounded soldiers and taking them to a helicopter that airlifted them to an Israeli hospital.

The brigades stated that the video of a law quality due to the distance and the special circumstances of the area and the clashes.

It is worth mentioning that the Al Quds Brigades of the Islamic Jihad stated its fighters were behind the killing of the two soldiers.