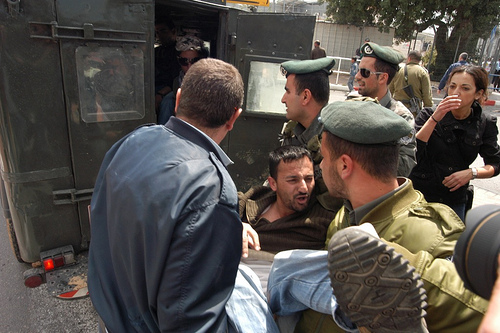 On Thursday the Israeli military court of Ofer ordered the release of 9 Palestinian nonviolent activists and a politician that were detained by the army on Sunday.
All ten have to appear in front of the military court on April 18th. The court today released seven after paying bails that ranges between 300 USD to 800 USD, while others had to sing on 6,000 USD bail if they fail to show in the court later this month.

Among the detainees is Abbas Zaki, a top Fatah leader; all 10 were detained during a protest organized on Palm Sunday in Bethlehem city demanding the right of free access to Jerusalem.

On Sunday, residents along with Israeli and international supporters forced their way into the gate of the wall separating the southern West Bank city of Bethlehem from Jerusalem and walked into Jerusalem before Israeli soldiers attacked them using rifle butts and batons. Soldiers forced people back to Bethlehem after detaining 10 Palestinians two internationals and three Israelis.

On Wednesday Hundreds of people gathered at the Ofer military detention center near Ramallah demanding the release of 10 Palestinians detained by troops on Sunday . Troops used tear gas and rubber-coated steel bullets to force the people away. Two were lightly wounded by rubber-coated steel bullets and many others were treated for the effects of tear gas inhalation. During the, clashes Israeli soldiers detained two Palestinian youth.

Abbas Zaki refused to be released by the army until all of the people detained with him are released , Fatah officials attending the court today told local media. Representatives from the EU also showed in court today.