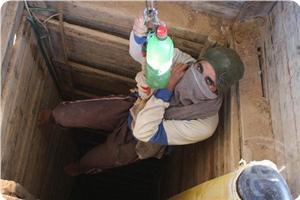 Five made it to the Egyptian side unharmed while Abu Taha got trapped and was found dead today, medical sources in the Gaza strip reported Thursday.

Since Israel started its siege on the Gaza Strip back on June 2007, the tunnels at the borders with Egypt became the main sources of much needed supplies for the 1.5 million Palestinians living in the coastal enclave.

Elsewhere in the Gaza Strip, Israeli tanks attacked areas near Al Qarrara town southern Gaza on Thursday. Local sources said that tanks and bulldozers operated at the border line and 300 meters inside the costal territory, no damage or injuries were reported.