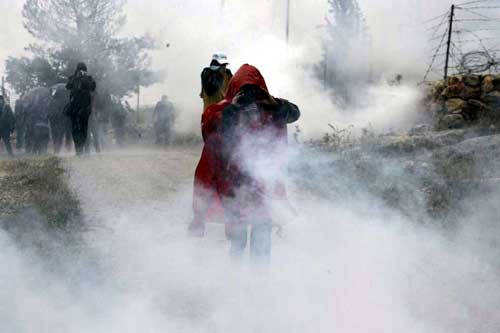 Villagers, along with international and Israeli supporters, protested on Friday at the village of Nil ‘in, central West Bank, the Israeli built wall on farmers lands.
Villagers conducted midday prayers at lands close to the wall then marched towards it. Israeli troops were heavily deployed at the gate of the wall separating farmers from their lands. Protester gathered at the gate and organizers delivered speeches in commemoration of Dier Yassin.

These military organizations became part of the Israeli army when the country was officially recognized.

Over 100 men, women, and children were systematically murdered. Fifty-three orphaned children were left along the wall of Jerusalem’s Old City, where they were found by Miss Hind Husseini who brought them to her home, which was to become the Dar El-Tifl El-Arabi orphanage.