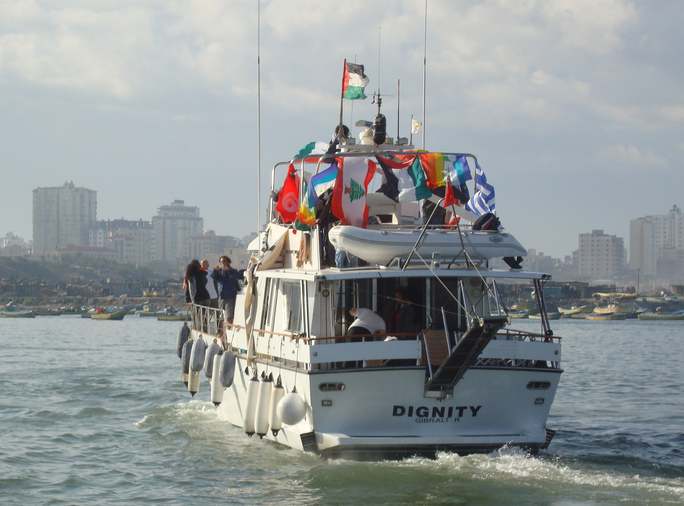 The European Campaign to End the Siege on Gaza (ECESG) strongly denounced threats made against activists who intend to participate in the upcoming convoy of solidarity ship heading to the besieged and improvised Gaza Strip. The vehicle of one of the activists was also attacked while parked in front of his home in Greece. The authorities were notified and opened an investigation.

On Friday, the campaign’s office in Brussels issued a press release stating that Israel is trying to terrorize the peace activists who declared their intentions to sail to Gaza.

500 peace activists, including European parliamentarians, are planning to said to Gaza.

The campaign stated that the threats will not be able to foil the efforts of human rights activists to break the siege on Gaza.

It added that it will not surrender to the Israeli demands and threats, and that solidarity ships will and will deliver basic humanitarian supplies to the residents of Gaza.

A coalition bringing together several organizations and movements was formed on April 3 in the Turkish capital, Istanbul.

They decided to launch a convoy of solidarity ships to sail to Gaza, and to be filled with supplies in addition to media personnel, legislators, activists and figures. They will be sailing to Gaza at the beginning of this coming May.

The threats are not new in nature, on August of 2008, Palestinian activist Osama Qashoo, originally from Qalqilia, in the northern part of the West Bank and residing in Britain, told the AFP that he received at least 17 death-threat calls asking him of “how we would like to die”.

Qashoo added that similar threats were also made to his family in the West bank. He described the threats as psychological and moral terrorism.