58 Detained, One Wounded and 70 Dunams Drowned in Sewage 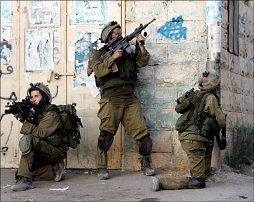 Thursday witnessed several attacks carried out by Israeli soldiers and policemen leading to the kidnapping of 58 Palestinians in the West Bank and in the 1948 areas, while one fisherman was wounded in Gaza and 70 Dunams of farmlands were flooded by Israeli Sewage. The Arabs48 news website reported that Israeli policemen arrested on Thursday at dawn 34 Palestinians in the 1948 areas, and 24 Palestinian in several West Bank areas.

Also, one Israeli soldier was wounded after the army invaded Tiqua’ town, near Bethlehem. The army invaded the town while local residents hurled stones at the invading forces.

In the Gaza Strip, a fisherman was wounded after the Israeli Navy opened fire at fishing boats in Al Waha and Al Sudaniyya areas, in the northern part of the Gaza Strip.

The attack happened while Israeli tanks invaded Al Faraheen area, south of Khan Younis, in the southern part of the Gaza Strip, and opened fire at several homes; no injuries were reported.

In Jerusalem, a Palestinian worker suffered concussions and bruises to several parts of his body after Israeli soldiers attacked him for “entering Jerusalem without a permit”.

The resident was identified as Najeeb Qawasma, 36, from the northern West Bank city of Jenin.

The lands belong to several residents and are considered their only source of income.