Haniyya: “Resumption Of Talks Gives Israel A Cover-up For The Judaization Of Jerusalem” 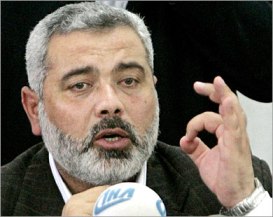 Ismail Haniyya, Prime Minister of the dissolved Hamas-led government in the Gaza Strip, stated Thursday the resuming peace talks with Israel provides another cover-up for what he described as the “Judaization of Jerusalem”.Haniyya stated that the return of U.S. Middle East Peace Envoy, George Mitchell, to the region comes while Israel is talking about ongoing settlement construction in the West Bank, deporting Gaza Strip Palestinians from the West Bank, and ongoing illegal settlement activities in occupied Jerusalem.

He said that the return to peace talks will only grant Israel more chances to continue its illegal policies.

“We will never recognize Israel, we will not abandon our legitimate rights”, Haniyya stated, “The siege on Gaza will end, and we will remain steadfast”.

The Hamas leader accused the United States of obstructing internal Palestinian unity talks mediated by Egypt, and added that the U.S. wants the Palestinian Authority in Ramallah to continue its security coordination with the occupation.

“The main challenge to unity talks is how would the P.A. in the West Bank be free of American pressure”, Haniyya concluded.

Thursday marked the beginning of a new tour by Mitchell aiming at attempting to restart the stalled Palestinian-Israeli peace talks. He will be holding a meeting with President Abbas on Friday.

The Palestinian Authority called on the Arab Follow-up Committee to hold a meeting as soon as possible to discuss the latest developments and to coordinate a unified Arab stance.