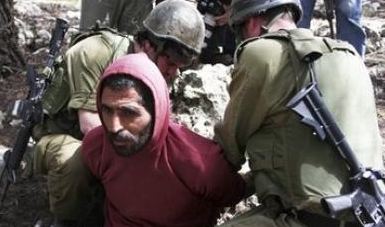 Israeli soldiers shot and killed two Palestinians, wounded 20 residents, including children, and kidnapped 45 residents in 27 invasions into the West Bank and four limited invasions into the Gaza Strip, the PCHR stated in its weekly report for the period between April 22 and April 22, 2010.The PCHR reported that the army continued the use of excessive force against the residents and against nonviolent protests.

During the reported period, soldiers conducted 27 invasions into the West Bank, and four into the Gaza Strip, and kidnapped 45 civilians, including 14 children and two women in the West Bank.

Among the kidnapped were two cameramen, including an Israeli cameraman, five international peace activists and two Palestinian activists.

On April 26, soldiers killed Ali Sweity, 45, in Beit Awwa town, near the southern West Bank city of Hebron, after demolishing a home while he was in it.

Sweity was on Israel’s “wanted list” for eight years until the army surrounded a home that belongs to one of his relatives after receiving info that he was there, and bulldozed the home while he was still inside.

Soldiers then dragged his body out of the rubble, shot and wounded five civilians, including two children. Israel claims Sweity carried several attacks against Israeli targets in the Hebron area.

The child was participating in a nonviolent protest against the Israeli “security belt” along the eastern Gaza border.

As the protestors were 150 meters away from the Nahal Oz crossing, soldiers fired rounds of live ammunition at youths who hurled stones at them, the child was killed and several residents were wounded.

Soldiers, based at an Israeli military post near the Gaza border, east of the Central District in Gaza, opened fire at the nonviolent protest that was organized by the Popular campaign Against the Siege.

The army continued its attacks against Palestinian fishermen in the Gaza Strip, opened fire at them and prevented them from fishing in Palestinian territorial waters.

A total of four limited invasion were carried out against the Gaza Strip. The invasions targeted Abassan Al Kabeera town and Kuhza’a town, near Khan Younis in southern Gaza.

Soldiers uprooted farmlands in the two areas and withdrew later on.
The army also carried a limited invasion into the Al Qarara and Al Faraheen areas in Khan Younis, and bulldozed farmlands near the border.

Soldiers also invaded an area near the Industrial Zone, west of the Eretz terminal and opened fire at a number of Palestinians who were collecting stones from the rubble of shelled and bulldozed buildings in an attempt to reuse the rubble in constructing property as construction materials are still now allowed in Gaza.

The situation in Gaza continues to decline due to the siege, while poverty rates and unemployment continued to exceed alarming rates as more than 1.5 Palestinian in Gaza are still isolated and under constant attacks and violations.

In the occupied West Bank, soldiers continued to use excessive force against nonviolent protests against the Annexation Wall and against settlement activities and ongoing settler attacks.

Twelve nonviolent protestors were wounded, two of them were children, one woman, in addition to an Israeli peace activist and an Italian activists.

Vice President of the European parliament Luisa Morgantini suffocated after inhaling gas fired by the army.

The army also continued to step-up its violations against organizers of nonviolent protests.

Five protestors were kidnapped during the nonviolent protests against the Wall and settlement in Bil’in village, near Ramallah. One of them is a Palestinian journalist, and one is an Israeli cameraman. The army also kidnapped three international peace activists and released them Saturday April 24.

In Hebron, soldiers kidnapped three protestors who participated in a procession organized by “Youth coalition Against Settlements”.

The detained were identified as Issa Amro, a local peace activist, and Israeli activists Professor Emanuel Fardi, and Jonathan Pollack.

The protest was organized against the ongoing closure of the Al Shuhada Street, in the center of Hebron.

On April 22, several Palestinian families living in Al Mosafer area, south of Hebron, were handed military orders to demolish their structures and tents, and to leave the area. The army claims the structures were built without a permit.

The area in question is close to a number of illegal settlement outposts and the settlers are trying to expand their outposts by forcing the residents out of their homes and lands.

In Jerusalem, the Israeli police forced a Palestinian family out of their home in preparation to hand it to Jewish settlers.

Soldiers also used excessive force against nonviolent protests in Jerusalem after the residents held protests to counter provocative protests carried out by fundamentalist settlers who demanded the removal of all Palestinians from Jerusalem.

Furthermore, Israel continued its illegal settlement activities in the occupied territories and uprooted twenty olive trees in the Salfit district.

The Gaza Strip remained totally isolated from the rest of the world while Israel stepped-up its siege on the coastal region, and increased the number of military roadblocks in the West Bank and around Jerusalem.

Troops also kidnapped a Palestinian patient while trying to cross through the Erez Terminal, in the northern part of the Gaza Strip. The patient was kidnapped while heading to an Israeli hospital for treatment after receiving a permit from the Israeli army.

The army continued to annex Palestinians lands in the West Bank in order to construct and expand illegal settlements and the Annexation Wall.

The PCHR warned that Israel is escalating its illegal measures and attacks against the Palestinians and that such measures violate the International Law and the basic rights of the residents.

It valued the relentless efforts international civil groups and organizations in supporting the Palestinians in their just struggle against the occupation, settlements and the Annexation Wall.

The Center also called for lifting the siege imposed on Gaza since more than more years as it led to the death of hundreds of patients while hundreds could face the same fate as the coastal region ran out of basic medical supplies and equipment.