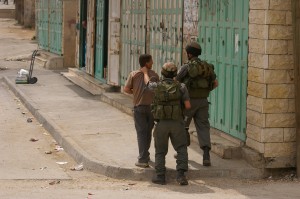 Israeli soldiers attacked on Saturday evening a nonviolent protest against settlements and ongoing settler attacks against the residents of Beit Ummar town, north of the southern West Bank city of Hebron.Local sources reported that the army attacked the weekly protest and fired gas bombs and concussion grenades at dozens of protestors, including international peace activists, who were marching towards Palestinian lands located near the illegal Karmei Tzu illegal settlement.

Dozens of residents received treatment by field medics after inhaling gas fired by the army. Mohammad Ayyad, media spokesperson of the Palestine Solidarity Project has hit by a gas bomb in its face.

In related news, the Youth Coalition Against Settlements in Hebron, held its weekly protest in the city with the participation on dozens of residents and international supporters.

The protest was held in the Old City near an illegal settlement outpost installed by the settlers on the rubble of a local school.

The protestors carried Palestinian flags and chanted against the occupation and the illegal settlers.