Hamas: “US Guarantees, A Scam” 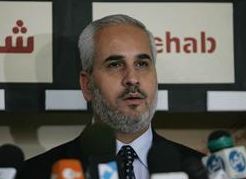 Hamas spokesperson, Fawzi Barhoum, stated that the guarantees of the United States for the resumption of indirect peace talks between Israel and the Palestinians are just a scam, and only provide Israel with more chances to continue its aggression and violations. Barhoum said that the Arab support for the “fruitless talks with the Zionist entity only reflects the Arab state of despair and weakness, and the weakness of the Palestinian Authority in Ramallah’.

He added that the Israeli stances regarding rejecting settlement freeze, and its ongoing violations and attacks are ongoing, while the resumption of talks is considered granting Israel a gift for its violations.

Commenting on the outcome of the Arab League Committee meeting in Cairo, Barhoum said that the American guarantees are just a scam as the United States is ongoing with its support to Israel, and to the ongoing illegal Israeli measures and violations.

“The resumption of talks gives Israel further chances to continue the Judaization of Palestine”, Barhoum said, “It obstructs the legal attempts to prosecute Israel’s crimes in international courts”.

The Follow-up Committee of the Arab Peace Initiative declared its support to March’s decision that supported the resumption of indirect peace talks with Israel for 24 months, and said that its received positive gestures from the U.S.