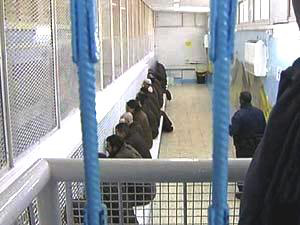 Israeli paper, Maariv, reported that Israeli Internal Security Minister, Yitzhak Aharonovitch, retracted his opposition to imposing further sanctions and restrictions on the detainees in an attempt to push Hamas movement to change its stances on prisoner-swap.On Wednesday, Aharonovitch held a special session on the issue and stated that he fears such sanctions would lead to “riots” in prisons and detention camps.
Maariv said that imposing sanctions would push Hamas to conclude a swap-deal under Israel’s terms.

Likud member of Knesset, Danni Ayalon, presented a draft law stating that “detainees who are members of terrorist groups, holding an Israeli soldier captive without visitations, should not be allowed visitations”.

He believes that denying the detainees from their basic rights will be the most effective measure to pressure Hamas.

The new measures would include limiting lawyer visitations to the minimum allowed, denying visitation rights and in some cases limiting them, confiscating TV and radio sets, preventing the entry of newspapers and magazines and preventing them from receiving any education.

The Israeli government would be discussing the draft this coming Sunday, but Maariv said that Israeli Prime Minister, Benjamin Netanyahu, would attempt to delay the vote for a week or two while Ayalon insists that the law be discussed as soon as possible.

In a direct violation to the International Law, Palestinian detainees are tortured during interrogation, held for extended periods without charges or trial, and denied their right to medical treatment.

The latest casualty among the detainees was Raed Abu Hammad who died on April 16 after he was hit by Israeli interrogators on the center of his spine and the back on his neck.

Fares added that Israel is holding captive 16 legislators and ministers, 36 female detainees including 4 mothers, and 340 children. 5700 detainees are from the West Bank, 780 are from the Gaza Strip, 450 from Jerusalem and 47 detainees from the Arab world.