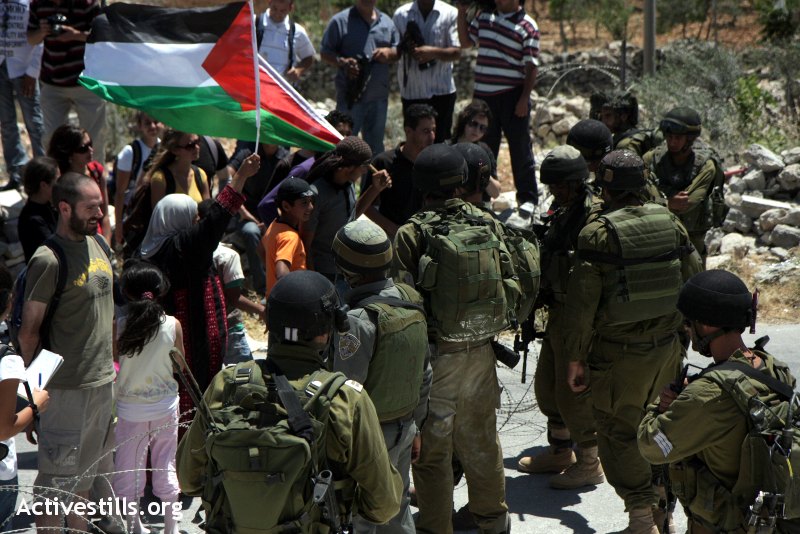 International and Israeli supporters joined the villagers of Al Ma’ssara, Al Walaja and, for the first time, Wad Rahal near the southern West Bank city of Bethlehem, in the weekly protests against the Israeli apartheid wall on Friday.
In Al Ma’ssara, people marched towards the farmland where Israel is building the wall. Israeli troops installed a barbed wire checkpoint to stop villagers from reaching the land.

For the first time in two years villagers along with their supporters managed to pass the military checkpoint and reach the agricultural areas.

Soldiers tried to stop protesters by using batons but some, including a group from France, broke through and spent time in one the fields.

Meanwhile Al Walaja villagers along with international and Israeli supporters marched to the wall’s construction site where organizers delivered speeches then ended the protest ended peacefully as troops kept their distance.

On Thursday three Palestinians were injured and another three were detained as troops attacked a nonviolent protest in the same location.

Israel resumed work at this section of the wall last month. Villagers say army bulldozers have so far uprooted 100 olive trees owned by local farmers. Some of these trees date back to the Roman Era, farmers added.

In 1949 the Israeli army forced people from Al Walaja out of their village over the Green Line. They then moved to what remained of their land between Bethlehem and Jerusalem.

In 1967 Israel annexed the new village to Jerusalem but the residents were not granted Israeli IDs. Moreover the military do not give residents permits to build houses or public facilities.

For the first time the people of Wad Rahal gathered to protest against the building of the wall on their land. Much has already been taken by the Israelis to build the illegal settlement of Efrata and the wall, which comes close to the centre of the village. Villagers are worried that if the wall is re-routed, as planned, even more land will be lost.

Around 200 hundred people, supported by internationals, marched the short distance from the school to the route of the wall after Friday prayers. Speeches were made and the protest, despite the presence of a large number of troops ended peacefully.