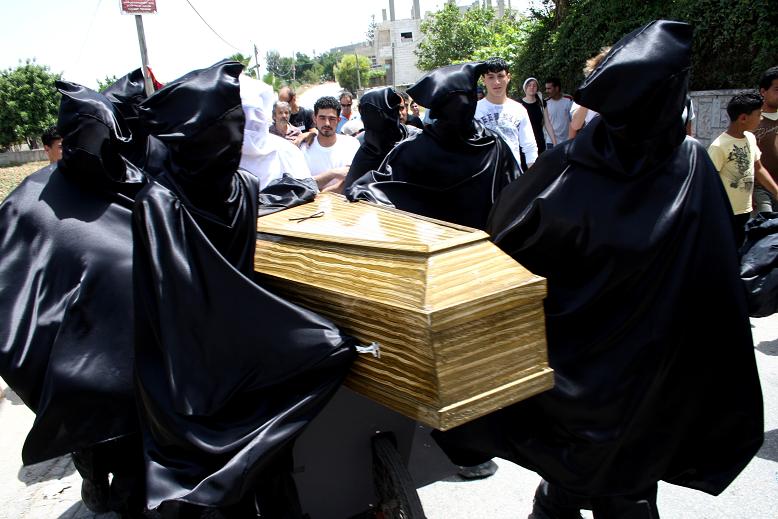 One resident was injured; Six others detained, on Friday by the army during the weekly anti wall protest at the village of Bil’in, central West Bank.

The villagers were joined by international and Israeli activists. Protesters set out toward the wall carrying Palestinian flags and calling for national unity against the Israeli occupation, land confiscation and stating their refusal to all military procedures to close the village and prevent activists from joining protests.

Today’s demonstrators, consisting of Palestinians, Israelis, and internationals, processed from the Bil’in mosque towards the Wall. Halfway along the route, the procession picked up additional demonstrators in the form of several men dressed entirely in black, carrying a coffin with a man inside.

The grim scene symbolized the Palestinians’ loss of land during the Nakba and their inability to return to these lands. Most importantly, the coffin symbolized the fact that Palestinian refugees are not allowed to bury their deceased loved ones on their native soil.

When the protest reached the wall, an Israeli army unit was stationed behind a concrete block. The gate that leads to the confiscated land was already closed and barbed wire was in place in front of it.

The army fired teargas which caused fire in the olive groves. A local man was shot by a teargas canister and he was transferred to Ramallah for medical treatment.