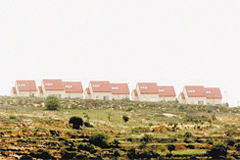 But Israel kept delaying the implementation of the court order, and the current the government of Netanyahu decided to legalize the outposts if they were built on “government land”. But the outposts, as well as all settlements, are build in the occupied territories and lands illegally confiscated by Israel while some outposts were illegally installed by the settlers without any Israeli approval.

Israeli Defense Minister, Ehud Barak, recently demanded the government to halt the removal of Givat Hayovel illegal outpost after an Israeli soldier, a resident of the outpost, was killed during an Israeli invasion to Khan Younis, in the southern part of the Gaza Strip, more than a month ago.

But even if the outpost is found to be built on private Palestinian lands, there will be no timeframe for removing it.

Settler leaders and Israeli Knesset members Zeev Elkin and Arieh Eldad “saluted” Netanyahu for his intention to legalize the outposts, and said that all Jewish constructions in what they called “Judea and Samaria” as well as every part of the country, must be legalized.

Likud member of Knesset, Danni Ayalon, said that “Netanyahu chose the correct path, the path of the Likud to legalize all outposts”.

Israeli Peace Now movement slammed the Israeli decision and said that instead of resolving the issue of settlement outposts and removing them, Israel is legalizing illegal constructions built in the heart of the West Bank and is constructing more settlements.