Infant Dies After Inhaling Gaza Fired By The Army In Hebron 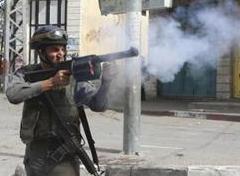 Palestinian medical sources in Hebron, in the southern part of the West Bank, reported Sunday that an infant died due to inhaling gas fired by the army at protestors in the nearby Beit Ummar town. The infant was identified as Hamza Samar Abu Maria, 18 months.

The sources stated that the soldiers fired on Friday evening a gas bomb at the home of Abu Maria who was already suffering from dehydration.

The infant was moved to a local clinic before he was moved on Sunday at dawn to a local hospital where he died shortly afterwards.