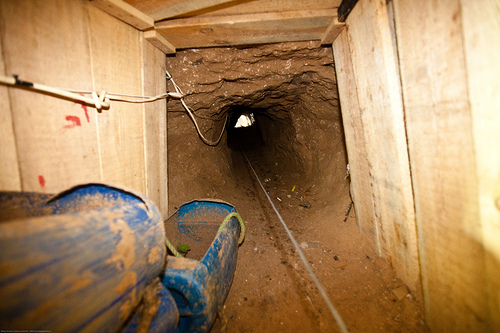 Local sources reported that the Israeli Air force bombarded on Monday at dawn two siege-busting tunnels east of the Rafah Terminal, in the southern part of the Gaza Strip. The sources added that F-16 Fighter Jets fired at least two missiles at the tunnels causing them to collapse; no injuries were reported.

The Israeli army said that the attack came in retaliation to a homemade shell fired at the Western Negev on Saturday.

Since Israel tightened the siege on the coastal enclave, tunnels have been the main source of much needed food supplies to the besieged 1.5 million Palestinians, Palestinians say.

At the same time, Israel accuses the Palestinians of using these tunnels to traffic weapons to the resistance groups.

Egyptian authorities have taken several measures to prevent the usage of these tunnels, including gassing them. Some 45 Palestinians died when tunnels were gassed by Egyptian police in the past three years.