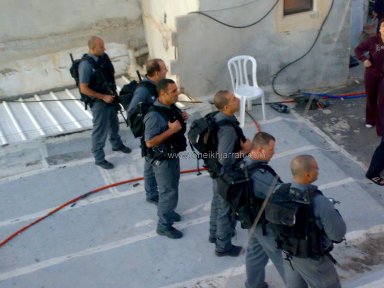 The Israeli police detained on Friday at least 30 left-wing protestors in Sheikh Jarrah Arab neighborhood in occupied East Jerusalem. One protestor was evacuated to a Jerusalem hospital suffering cuts and bruises.Israeli Ynet news reported that around 350 protestors held their weekly protest in Sheikh Jarrah, chanting against the Israeli occupation and its illegal practices against popular resistance and against the Arab residents of East Jerusalem.

Some of the protestors gathered on a road near a bthatuilding was recently occupied by fundamentalist Jewish settlers as its Arab residents were forced out by a court order.

The Ynet said that the police arrested some 30 activists and also detained a reporter working for the Israeli Radio. The reporter was released later on after he proved his identity.

Knesset Member Dov Hanin, of the Hadash [Israeli Communist party] told the Ynet that the police are resorting to excessive use of force against the demonstrators and the reporters as well.

The protestors demanded justice and demanded the government and the Jerusalem Municipality to stop their racist policies against the Arabs and the Palestinians in the city.